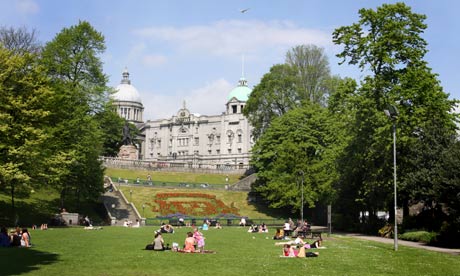 Union Terrrace Gardens in Aberdeen: it may be handed by the council to a consortium of business interests. Photograph: Stephen Finn/Alamy

In 1491, the Scots parliament passed the Common Good Act affirming that the land and property of Scotland‘s royal burghs “be obseruit and kepit to the commoune gude of the toune and to be spendit in commoune And necessare thingis of the burgh”.

This was partly in response to popular unrest over an act of 1469 that had abolished early democracy and gave town councils the right to appoint successor administrations.

As a historian, Tom Johnston, pointed out, “from that year until the Burgh Reform Act of 1833, the landowners and the commercial bourgeois class controlled all burghal administration of the common lands, and controlled it in such a way that vast areas of common lands were quietly appropriated … and to such a length did the plunder and the corruption develop, that some ancient burghs … went bankrupt, some disappeared altogether from the map of Scotland, some had their charters confiscated, and those which survived to the middle of the nineteenth century were left mere miserable starved caricatures of their former greatness, their Common Good funds gone, their lands fenced in private ownership, and their treasurers faced often with crushing debts”.

So the privatisation of public spaces is nothing new. But over the past century, municipal government in Scotland built up extensive public provision of public transport, power generation, parks and other public services. This was eroded by postwar statist policies that nationalised power generation, for example. Local democracy was then further diminished by the abolition of parish councils in 1929 and town councils in 1979.

More recently, the public realm has been attacked by the creeping privatisation of what little remains of public space. In Edinburgh, from 1716 to 1808, the town council used the Common Good Fund to acquire all the land for the development of the New Town. The streets and many of the open spaces in this World Heritage site are thus the common property of the citizens of the city. In 2008, however, the City of Edinburgh council handed control of much of the central area for five years to a private consortium of businesses, Essential Edinburgh Ltd, as a Business Improvement District governed by Part 9 of the Planning (Scotland) Act 2006.

Out of 15 directors of the company, only one is from the council, and he is an official, not an elected member. Apart from the chief superintendent of Lothian and Borders police, the remainder are private businesses including Harvey Nichols, RBS and Macdonald Hotels.

The council is prohibited from having more than 20% of the membership to ensure that “the company shall not be under the control of the local authority” and the quorum for a directors meeting is a mere two.

A prominent project of Essential Edinburgh has been the opening of St Andrew Square Garden to the public. While this is welcome, it is unclear why such a business consortium ever needed to be involved. The council leases St Andrew Square Gardens from the property owners in St Andrews Square for £1 per year and sub-leases the gardens to Essential Edinburgh for a further £1 per year. The gardens were renovated with £2.6m of public funding but the land remains outside the control of the council. This private company has adopted management rules that dictate what the public are allowed to do and when.

In Aberdeen, the council plans to hand over Union Terrace Gardens to a consortium of business interests – Aberdeen City and Shire Economic Future (Acsef) – under a long lease, although that is now in doubt after Labour became Aberdeen’s largest party in the council elections, and agreed with its Tory coalition partners to stage a free vote on the scheme.

Scotland’s towns and cities are increasingly being subject to experiments in private management of public spaces, many of which are legally common-good land to be managed for the benefits of the residents of the burgh. These arrangements have been the subject of very limited scrutiny by the public. Likewise, across Scotland’s 196 burghs, the abolition of town councils in 1975 has led to loss of democratic oversight by burgh residents of administration of common-good lands.

In 1910, Lloyd George’s “people’s budget” contained provision for a land tax to be applied across the whole of Britain and Ireland. This was later repealed but not before the ownership and occupation of every square inch of the country had been investigated and mapped. The Edwardians knew exactly which buildings, land and streets were private and which were public. It is a sorry reflection on the state of municipal government that 100 years later the citizens of most of Scotland’s towns and cities remain largely clueless about such matters.